The only Pakistani pro wrestler representing Pakistan in pro wrestling

Baadshah Pehalwan Khan is the only Pakistani pro wrestler representing Pakistan in pro wrestling. “Pakistan Will Rise” or “Pakistani Kissi Se Kum Nahin", and so has managed to register his name in Pakistan book of Records for being the Amazing Pakistani. Born on September 9th, 1993, Baadshah Pehalwan Khan is the only Pakistani pro wrestler representing Pakistan in pro wrestling. “Pakistan Will Rise” or “Pakistani Kissi Se Kum Nahin” are his catchphrases as a leader whose only purpose is to show to the entire world that he’s the only conqueror from Asia and a noble warrior of Pakistan. He wants as the image of his country: a nuclear power and nothing will stop him to shine. Baadshah Pehalwan Khan wants to be the future of the ring with his charisma, weightlifting discipline and wrestling techniques, ancestral heritage of Pakistan. He will make an impression and ensures its ascent. Baadshah Pehalwan Khan debuted in wrestling in October 2010 in France as a trainee and had his first pro wrestling match in January 2012. He was trained by APC Catch for the lucha libre style and for the European style, he was trained by Flesh Gordon in France. He was also trained in the USA by Jesse Hernandez. In January 2014, he was signed by Wrestling Stars (Catch WS) in France the n°1 pro wrestling company in Europe. Since then, Baadshah Pehalwan Khan has competed against the best European pro wrestlers as Flesh Gordon, Prince Zephy (Wrestling Stars World Champion), Jimmy Gavroche (French Heavyweight Champion), Bernard Vandamme (European Champion), Tiny Iron… In July 2014 he traveled to Barcelona – Spain where he represented Pakistan successfully in the Spanish promotion Vila Catch. March 14th 2015, he went to Belgium to take part in the Four Continents Cup Match where he represented Asia in a Eurostars Wrestling show in Brugge. On March 28th 2015, he went to Ajaccio – Corsica where he represented Pakistan. On August 8th 2015, Baadshah Pehalwan Khan has been invited to Los Angeles, California USA for Pakdayla where he was awarded with two awards from UFPID and Hollywood Tribute for Excellence in Sports. On August 16th 2015, he was invited to the premier of the Lollywood movie “Karachi se Lahore” in Hollywood alongside Bollywood, Lollywood and Hollywood stars. On September 4th 2015, Khan was invited by the french tv channel MCS – Ma Chaîne Sport, on their weekly show for an episode of Impact Wrestling alongside official french Impact Wrestling commentators Celian Varini and Gregory Deas. During the show, Khan talked about his career, awards won in Los Angeles during Pakdayla and his future. Thereby, Baadshah Pehalwan Khan became the first Pakistani to be invited as a guest on a french TV show. Countries where Baadshah Pehalwan Khan has wrestled in : France, Spain, Belgium, Corsica. Join him on his Official Facebook Page at https://www.facebook.com/BPKOfficial/timeline 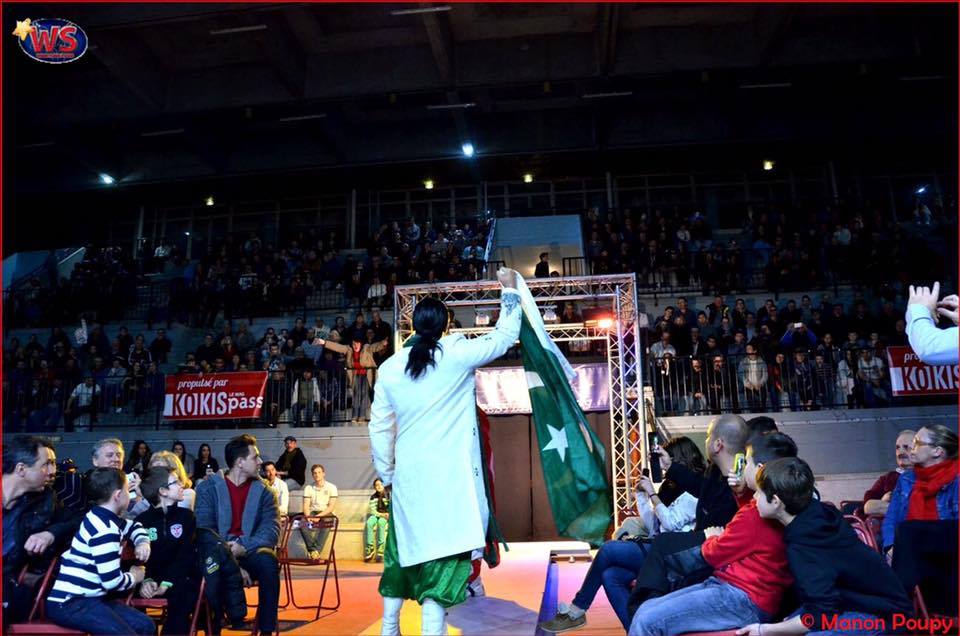